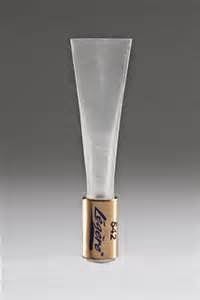 On May 22, 2014 I began trialing a Legere synthetic bassoon reed - a reed I have long been interested in.

I was originally piqued when I discovered youtube videos of the bassoonist with WindSync wind quintet using a Legere reed.  Like many, I assumed the Legere reed would be like the plastic Fox bassoon reeds we all have likely experienced at one time or another - hard, inflexible, unresponsive, and totally without color or finesse.

I was further piqued when Paul Hanson traveled through Montana to give a few performances (which I was unable to attend) and was informed by colleagues that he was using Legere reeds exclusively.

Checking out his youtube videos, I was impressed with the obvious facility of the reeds.  To that end, myself and five of my Montana bassoon colleagues decided to jump in and give them a try.  Justin Miller was gracious enough to give us a discount since we bought them as a group.

We had to wait several weeks for the reeds because Legere was making adjustments to the machining.  Justin Miller traveled to Legere to observe the result of those changes and I believe we received some of the first batch with the improvements.  It was very exciting to receive the reed and though it came with instructions for adjustment and maintenance, I popped it on my bocal and played after merely perusing the included reading material. 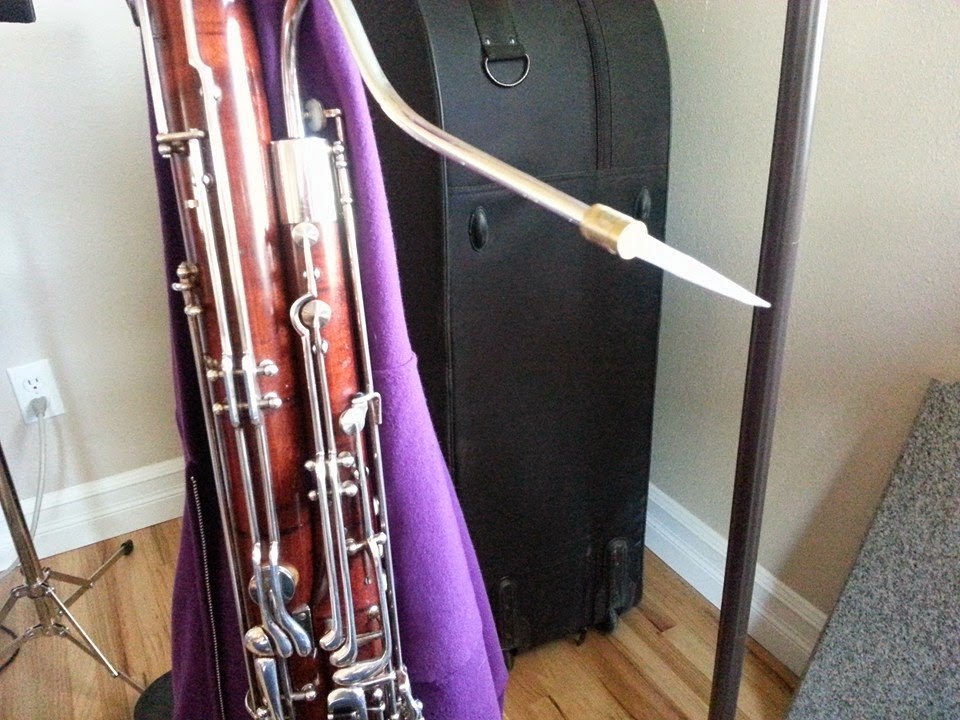 I was immediately impressed with the tone color and response.  Very dark, lovely sound with easy response throughout all registers.  Most impressive was the strength and stability of the top octave which clearly benefits from the structural strength of the reed.  I played for several minutes in awe of how much better it was than I expected.

What I began to realize though was that the aperture was much more closed than I am accustomed to playing on.  The more I played, the more I realized that with the smaller tip opening, I couldn't play as loud as I wanted to or dig into my bottom octave.  The pitch was on the high side and I was unable to bring it down. 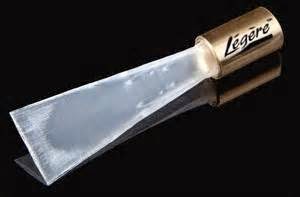 Though I was immediately impressed, I realized that there were some severe limitations.  I returned to the reading material that was included and attempted to make adjustments to the tip as the directions instructed.  However, the adjustments I made simply did not last.  In addition, the caution against damaging the reed by breaking the sealed sides made me very nervous and conservative with my attempted adjustments.

With each practice session, I tried the reed and was always initially impressed with various aspects.  The ability to play softly with ease of response.  Not quite as soft (ppp) as my cane reeds but soft enough to enjoy the comparatively little effort it took to illicit soft response.  I also found the whole range of the instrument to be very consistent on the Legere.  Though the pitch was sharp, the pitch was consistent throughout.  The tone was also consistent.  Open F, loud C-#, low F#/A-flat, tenor D - all notes that tend to be unstable on my instrument especially on less than totally perfect reeds - were stable and responded in all dynamic ranges and attacks.  Additionally, though the reed tip was sharp at first, I was able to double tongue easily once I adjusted to the feel of the tip.

I found myself wanting to play the reed because it was very stable and didn't require me to fiddle around - I could just start playing.  The ultimate test for me was running through Bach Cello Suites 1 - 5 and the response, down slurs, and tone were really quite wonderful.

A few weeks in, one of my colleagues emailed to see how I felt about the reed.  I shared that the aperture was too closed preventing the reed from being free-blowing and made it sharp in pitch.  I told him I wasn't able to make meaningful adjustments to the tip.  He enlightened me to better adjustments:

Regarding a more open aperture, the web site mentions to heat the water to 194 degrees, place the reed in the water for 30 seconds, remove with tweezers, gently insert a plaque and place in cold water for one minute.

I immediately gave it a try but for some reason I misread plaque and instead inserted a forming mandrel into the tube and THEN placed it in the hot water followed by ice water.  The whole reed opened up and was much more vibrant.  It lowered the pitch and was even on the flat side.  It was an improvement in some aspects but it had made the reed "thuddy".  It forced me to "muscle" the reed and caused my jaw to tire very quickly.  However, I could see even greater potential knowing that the reed could withstand adjustments that would last.

A few days later when the reed started to close down a bit more, I attempted the adjustment again.  This time placing a plaque in the tip, into the hot water and then into the ice water.

THIS WAS THE PERFECT ADJUSTMENT!

Immediately, the read was fully vibrant, right on pitch, capable of full dynamic range - exactly what I wanted.

Though I had already traveled with the reed to Baltimore (sea-level) and Salt Lake City (4,500 feet) I had not had the tip adjusted correctly.  In traveling, I was able to ascertain that the reed is, from what I could discern, completely unaffected by changes in temperature, humidity, and elevation.  This was exciting because in the past season I have performed from sea-level to 4,500 feet and have had to change/ruin a lot of reeds based on my locale at the moment.

After the highly successful tip-plaque adjustment, I was contracted to perform rehearsals and concerts in Kalispell (2,500 feet) with temperatures between 55'-65' degrees and lots of humidity and rain compared to 3,500 feet and mostly dry here in Great Falls.  I was a little uncertain upon arriving at my first rehearsal but I figured that since it was a Pops Concert and I wasn't in my home orchestra, it was worth the risk.  The first rehearsal went well.  Before the concert the next evening I made the tip-plaque adjustment one more time and was impressed that it improved the reed even more, making it more free-blowing and vibrant.

An outdoor Pops Concert was the ultimate use for it.  The weather was cold and though our conductor kept talking at length between pieces, I didn't have to worry about the reed drying out, becoming too hard, or going flat with the temperature.  Furthermore, I wasn't ruining a great cane reed on a fluff concert.

The next morning, my hosts asked me to play bassoon for them. I put my bassoon together, pulled out the Legere and without any warm-up or reed soaking I played the Mozart Bassoon Concerto with total ease musically, dynamically, and technically.  I was stunned!  I played the Legere that evening for another outdoor concert and was furthermore impressed as the reed seemed to be even slightly better.  During intermission, I soaked and tried my cane reeds which I discovered were mushy and weak.  At that moment I was SO RELIEVED to have the Legere reed as I realized I would have been miserable playing on my cane reeds in those conditions.

When I returned home the next day to 3,500 feet, 70' degree weather I pulled the Legere out for a practice session and was completely pleased.  I jumped right into practicing without fiddling with reeds to return them to adjustments befitting my home elevation and climate. 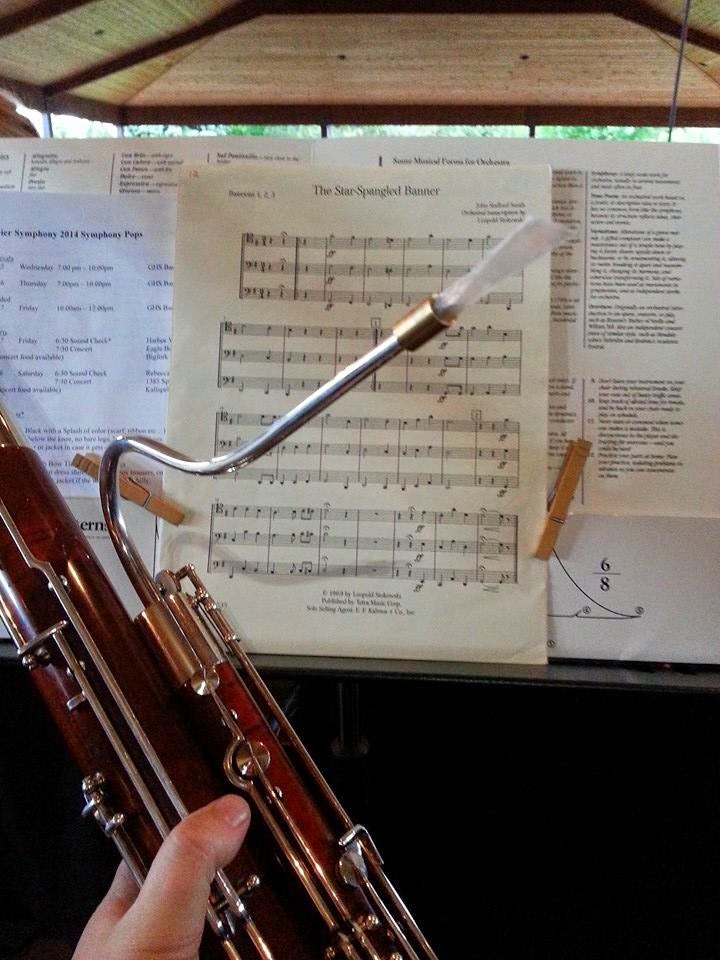 I am very excited about the Legere reed!  I purchased a medium strength reed.  Though I still have not achieved a complete ppp dynamic worthy of a second bassoon audition (see previous blog posts), I feel very pleased with the dynamic range it offers.  The tone color in all octaves is desirable: focused, projecting, consistent.  I am now able to punch out my bottom octave in a ff dynamic.  I love the projection of the top and mid-range.  It's very easy to push the reed without it becoming harsh or too reed-y.  It has sizzle but not an offensive buzz.  I am still experiencing some muscle fatigue in my jaw after about 2 hours of consistent playing but I think I might be able to eradicate that simply over time as I become conditioned with it or perhaps trying the soft hardness that Legere also makes the reeds in.

I will keep using it through the summer and I'm looking forward to taking it into both a symphony and Chinook Winds rehearsal in September.  I anticipate a very positive response from my colleagues.

For a bassoonist who has played professionally in the Intermountain West since 2009, I have come to know the frustration of constantly changing elevations and climate with the accompanying inconvenience of constantly changing reeds.  Especially since the greatest single obstacle I have had to face and overcome with auditions is that EVERY audition I have taken has required me to anticipate huge changes in my reeds.  It has been my dream to change elevation by thousands of feet and not worry about making reeds from scratch in 24 hours.

Though I have always felt very confident in my reed making skills, it is very frustrating to walk into auditions worrying about sagging E's and C-sharps that were perfect the day before at a higher elevation.  If I can continue to find success with the Legere, it will become my highest recommendation for traveling bassoonists who don't want to make reeds at every elevation.

This year, I started the incredible journey of homeschooling my son.  On top of rehearsals, practice, private teaching, concerts, touring, and life, homeschooling has made my schedule so tight that I am constantly in a battle to triage each activity based on what ABOSLUTELY has to get done vs. what can wait.  The potential of eliminating reed making would be an obvious boon to my schedule.  So, am I *hoping* these reeds will work?  YES!  Is that causing me to paint an overly optimistic picture of the capabilities of these reeds?  NO!

I was hoping to post videos for this review but in between work trips and a month long vacation, laundry, packing, grocery shopping, teaching and practicing all in ONE DAY took precedence over recording excerpts for yotube.  However, I WILL add some in the future as I continue to track my experience with Leger reeds.
Posted by Elizabeth Crawford at 8:23 PM
Email ThisBlogThis!Share to TwitterShare to FacebookShare to Pinterest
Labels: bassoon, climate changes, double reeds, elevation changes, Legere reed review, Légère Reeds, making reeds, reed making, reeds, review, synthetic bassoon reed, synthetic reeds